Yassir, an African super app platform that offers on-demand services such as ride-hailing, food and grocery delivery, and payments, has raised $150 million in Series B funding, five times what it raised in its previous priced round last November.

The investment was led by BOND, the growth-stage firm that Mary Meeker spun out of Kleiner Perkins in 2018. Other investors in the growth round include DN Capital, Dorsal Capital, Quiet Capital, Stanford Alumni Ventures, and Y Combinator via its Continuity Fund, among other strategic investors.

The African startup, first launched in Algeria, has now raised $193.25 million since its inception in 2017. While its valuation remains undisclosed, Yassir considers itself the most valuable startup in North Africa and one of the highest-valued startups in Africa and the Middle East, where it plans to expand in the coming months.

When CEO Noureddine Tayebi started Yassir, the plan was to build a super app that included services people — in the French-speaking Maghreb region consisting of Algeria, Morocco and Tunisia — had little or no access to on one platform. So far, its execution has been spot on. Not only is the company offering ride-hailing and food and grocery delivery services (via Yassir Express) in 45 cities across six countries, but this report also says that three out of five on-demand activities in Algeria, its first market, are made via the platform.

This calculated growth has moved Yassir closer to its overarching plan to provide banking and payments. According to Tayebi, providing on-demand services in food and transportation was the entry point that allowed Yassir to gain users’ trust — which he argues is one reason most Africans are unbanked — for this endeavor.

For perspective: Morocco, one of Yassir’s main markets, over 65% of Morocco’s population does not own a bank account, and according to a 2018 McKinsey report on growth and innovation in African retail banking, 57% of the continent’s population lack any form of a bank account. Yet, the report also highlights that 40% of Africa’s banked population prefers digital channels for transactions. Therefore, Yassir’s thesis is that providing consumers with a mobile banking solution as part of a broader suite of services will meet an essential need in the African market, where 50% of the population can access the internet.

“Our business model from day one was a super add model and getting into payments. When we first started, the observation was that most people were unbanked, and the number one reason is that people don’t trust the banking systems here for various reasons,” the chief executive told TechCrunch in an interview. “We thought we could provide on-demand services that solve immediate needs around where people spent their money. We knew if we executed well, we could have a large user base that subconsciously trusts us, which we felt was pertinent to offering payment services.”

Yassir, an all-in-one ecosystem app, provides its customers with a single-point solution for managing their day-to-day activities, from traveling to work to ordering groceries and meals. Its financial services serve this multi-sided marketplace ecosystem, which includes 8 million users (over 2.5x from last year) and 100,000 partners consisting of drivers, couriers, merchants, suppliers and wholesalers. Yassir is leveraging this network — which also includes a B2B e-commerce retail part that connects fast-moving consumer goods (FMCG) suppliers with merchants — for its payments play assembled on top wallet provision and deployment of drivers and couriers as money agents. 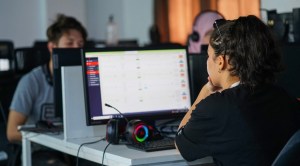 What’s next for the YC-backed platform with components from Uber, DoorDash, Udaan and PayPal? “First, we want to create a local tech startup success model which will be emulated by others and more so Yassir team members,” Tayebi answered. “Second, we want to empower the local talent and, more importantly, the technical talent which often leaves the region, mainly to Europe, to pursue further studies or find jobs,” added the chief executive, who, after earning a Ph.D. at Stanford and spending 15 years in Silicon Valley working at various companies, returned to Algeria in 2016 to get involved in the country’s nascent tech scene.

As such, Tayebi, who founded Yassir with Mahdi Yettou, says the startup intends to invest heavily in its engineering and product teams by tripling their size, at the least. He also underscored how the funding will assist Yassir — which has offices in Algeria, Canada, France, Morocco and Tunisia — in consolidating its growth, rolling out new services in the existing markets, and expanding into new geographies across Africa and the Middle East directly or via acquisitions.

“Although we like to consider ourselves as leaders in the Maghreb region, we’re just scratching the surface, and there’s still a lot of room to grow,” expressed the Silicon-Valley-based Algerian entrepreneur while noting that Yassir isn’t fazed by Uber and Bolt’s duopoly in the ride-hailing category across some of the markets it plans to expand into. His confidence stems from Yassir’s dominance in its main markets where the Uber-subsidiary Careem has struggled.

Yassir is one of five Africa-focused startups to have closed a mega-round — that is, investment rounds greater than $100 million — this year. The self-described most valuable North African startup joins Flutterwave, Wasoko, Instadeep, and Sun King on the shortlist, which as of last year, included ten startups. This reduced number is a stark example of how quickly markets change and reflects ongoing global macroeconomic challenges that have seen startups lay off employees, slash valuations, or go bust. But while startups have generally faced a stricter fundraising environment this year, Tayebi claims it wasn’t the case with Yassir.

“In our first few years, we had a hard time raising money because of the region we operate in, despite us executing well,” he said. “That pushed us to be frugal and conscious of unit economics, profitability, and burn rate. And with the market shifts, we could still show that we had grown significantly with outstanding unit economics. So fundraising was easier because we grew so much that VC firms could not ignore us anymore.”

Daegwon Chae, a general partner at BOND, one of these VC firms, said his firm’s lead investment in Yassir stands on the sentiment that technology will “rearchitect” consumers’ relationships with transportation, food, and financial services globally. “This investment is an extension of that belief in an underserved but dynamic, rapidly growing region. Emerging out of North Africa, the app has already become indispensable to users for critical aspects of their lives,” he added.