The motto over at Twitter is clearly a throwback ‘move fast and break things’ at the moment under new ruler Elon Musk, and the latest thing to break is the just-introduced $8 monthly Twitter Blue tier, which includes a shiny ‘verified’ checkmark indistinguishable from the ones that Twitter used to hand out selectively to high-profile accounts. The social network [update: the text was actually live as of the launch yesterday] that any accounts freshly created on or after Wednesday, November 9, will not be able to subscribe for now.

I should stress that this is ‘as of this writing,’ since the pace of change is such over at Twitter HQ right now that what may be true as I type these words may not be by the time I add the period to the end of this sentence. That’s because Musk has overtly said the company will be doing “lots of dumb things in coming months” with an attitude of rapid iteration based on results. 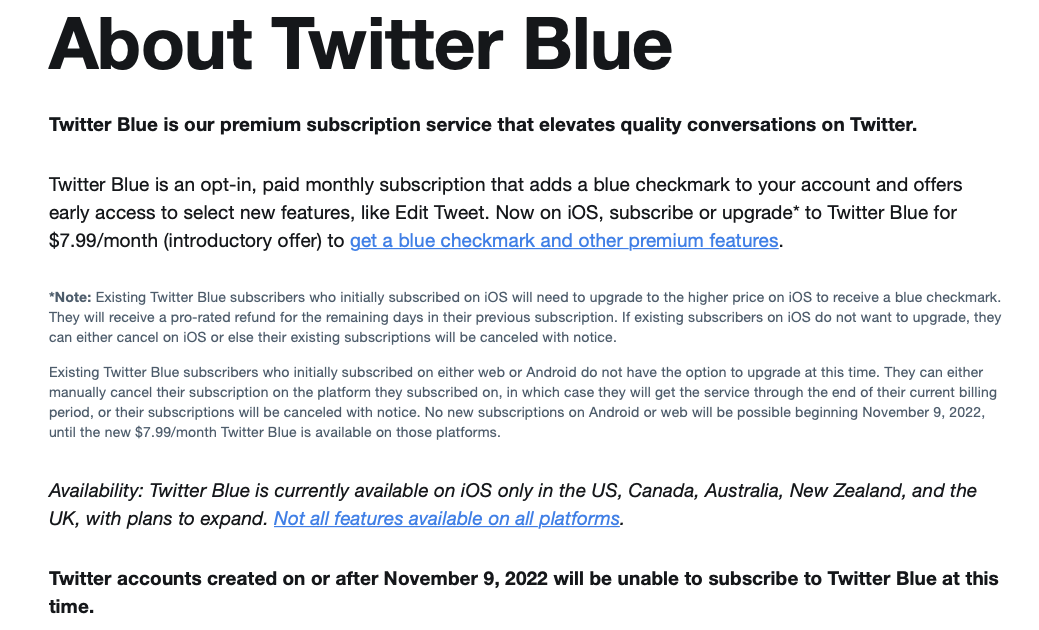 One fresh example is the ‘official’ account label, which was a second checkmark that Twitter was providing to organizations including news outlets, as well as high-profile individuals like politicians and influencers who are often imitated for scamming purposes. That program went live on Wednesday and was already nixed just a few hours later.

The block on Blue for new accounts appears to be related to what happened immediately once the subscription actually provided the blue check ‘verification’ that Musk had previously provided: People abused it.

A number of fake accounts pretending to be celebrities, brands and otherwise influential people immediately cropped up and made audacious, false claims, including a fake LeBron requesting a trade away from the Lakers, a fake Connor McDavid saying he already had been traded from the Oilers to the Islanders, a fake Nintendo account posting a picture of Mario flipping the bird and much, much more.

Stopping new accounts from getting the blue check is a temporary solution to preventing some of this kind of impersonation (thought it doesn’t block legacy accounts from doing so, including the many inactive accounts that are out there ripe for takeover or manipulation) but it’s unclear how the company will prevent this kind of thing longer-term. As with everything that happens with Twitter these days, they’ll probably try a bunch of things in public across the platform at large and seed what sticks.