Rad Power Bikes, the U.S.-based e-bike manufacturer, has made its mark as a direct-to-consumer business selling fat tire bikes that helped shape the COVID e-bike boom. In 2021, the company raised two massive rounds – $150 million in February 2021 and another $154 million just eight months later – that brought its total funding above and beyond what Europe’s e-bike darling VanMoof secured.

I wanted to see why investors seemed so keen on the company and why these bikes were gaining in popularity.

The company recently sent me two e-bikes to test out: the RadRunner 2 and the RadExpand 5. They both appealed to me as affordable and stable bikes that could be delivered to your door, but I also wanted to give them a go based on a comment that Rad chief product officer Redwood Stephens made in a recent interview with TechCrunch.

Stephens told me that Rad’s main target customers aren’t urban commuters. Rather, Rad’s sturdy frames, fat tires and easy-to-read digital displays are aimed at people over 50 years old who live in suburban or rural areas and want a greener mode of transport that still feels safe. I decided to test that by putting my mom on one of them, and you’ll hear her thoughts on that later (Spoiler: She wants to buy one.)

The RadRunner 2, an update on Rad’s very successful RadRunner utility bike with a step-through frame, came out in December 2021 at $1,499 and comes in black or forest green. The RadExpand 5 launched in April as a foldable e-bike at $1,599. It comes in black or white. 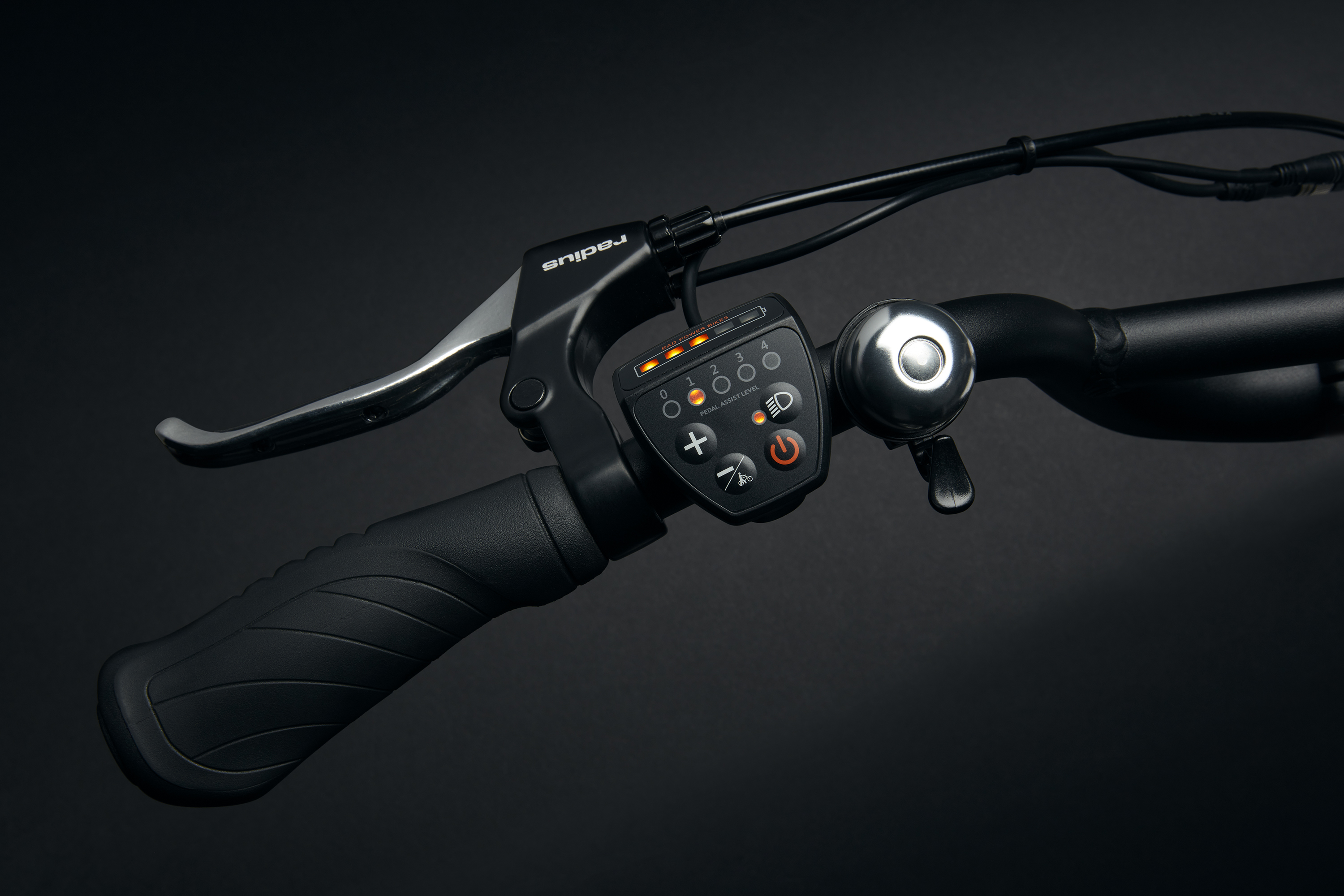 Both the RadRunner 2 and RadExpand 5 have a simple display to turn the bike on and off, choose a pedal assist level and turn the lights on.

The two bikes have very similar looks, feels and specs. Here’s what they have in common:

Here’s what’s the same, but different:

Both bikes come with an optional front rack and an integrated rear rack, but their payload capacities differ. For example, the RadExpand’s rear rack max load is 59 pounds, but the RadRunner can handle 120 pounds (and then some, as my partner and I proved.)

The kickstands are different, too. RadExpand’s is a regular style kickstand, but RadRunner’s is a dual leg, spring loaded kickstand, which is much harder to push over. Additionally, while both bikes have LED head/tail/brake lights, RadRunner 2’s rear lights not only indicate when braking but also have a flash mode.

They both are very easy to turn on by holding down the ON button, but I found that maybe made them easy to steal. Many suburbanites don’t actually lock their bikes up, but rather leave them in the shed. For a smart bike, it would be cool to see an anti-theft locking system.

Finally, the RadRunner and the RadExpand both have fat, puncture-resistant tires, but just how fat differs with each bike. The RadRunner has 20 inch by 2.2 inch tires, and the RadExpand’s tires are 20 inch by 4 inch. I found that on both bikes, the fat tires made for a bouncy, rather than bumpy, ride over potholes and other cracks in the road.

What my 61-year-old mom thought of the RadRunner 2

The RadRunner2 is great for both on-roading and off-roading. Image Credit: Rebecca Bellan

“The throttle makes it a game changer. I like how when it accelerates it doesn’t accelerate where you feel like you’re being thrown back. It’s a gentle acceleration, which is especially good for us older folk,” Bellan the senior told me after an hour-long cycle around a suburban neighborhood in Long Island.

She noted that despite its 65 pounds of weight, the RadRunner 2 isn’t so heavy as compared to her current e-bike, the Aventon Pace. The Pace, by the way, does indeed feel like you’re about to be thrown off the saddle when you accelerate using the pedal assist.

Bellan said the high handlebars kept her from feeling like she was leaning over too much, which helped with the general feelings of stability and avoiding back pain.

The model we tried out had a seat for an additional rider on the back. It’s probably meant for a child, but my partner and I defied the advertised 300-pound weight limit on a previous jaunt around the neighborhood. My mother said she’d choose to have a storage rack instead, which is one of the options available to RadRunner 2 purchasers.

“I would go shopping in it. Totally, without a doubt,” she said. “With all the months I didn’t have to worry about the weather, this is the way I would travel through town.”

An avid suburban biker, Bellan even said she’d be willing to take it offroad.

“It would make me feel more confident going on a mountain biking trail knowing that I had the opportunity to use these extra tidbits and develop my legs,” said Bellan; the extra tidbits being the different levels of pedal assist and the throttle. “I like that I can still get a workout but be able to traverse all the hills without killing myself.”

Off-roading with the RadExpand 5

The RadExpand 5 is also great for on-roading and off-roading. Image Credit: Rebecca Bellan

When Rad Power dropped off the bikes to me, they told me the RadExpand is geared towards suburbanites who would leave the bike in the trunk of their car and take it on camping and other off-roading adventures. So naturally, I decided to find the nearest mountain biking trail and give the whole thing a go.

I’ll first note what the experience of folding and unfolding the bike was like. In a word: Clumsy. But it got easier with time. Folding up the bike is a two-step process. First you drop the handlebars lower and then sort of close the bike like a book as it balances on one tire. No tools required, which is excellent for saving time and sanity.

The bike weighs 62.5 pounds, which somehow feels heavier when it’s condensed in a smaller package. I had to give it a good heave to get it into the trunk of my crossover – I also had to put the backseat down to fit it properly, so ample storage space is of the essence.

&nbsp
&nbsp
I drove the bike over to a nearby trail and decided to choose the “more difficult” track as opposed to the “easy” or “difficult” tracks, just to see how the RadExpand would perform. I forgot to consider how I might perform.

I’m a very confident city biker. I can weave in and out of rush hour Second Avenue traffic, throwing up a middle finger to the car that’s double parked in the bike lane without losing momentum. But mountain biking is an entirely different beast, and there were some moments I was truly scared for my life. That might be because Rad doesn’t actually advertise this as a mountain bike, but I’m also confident that someone with more experience off-roading would have found the RadExpand to be a dream on that trail.

That said, I generally felt safer on the RadExpand in that rough terrain than I ever have on a normal mountain bike.

The fat tires simply make you feel more stable, and the fact that you can rely on the throttle to speed up when needed was vital when braving the gravel, sand, gigantic tree roots and big inclines in the trail. I suppose I’d say the suspension was good, because I never once felt that jolting pain that goes from your tailbone up your spine that I get riding over bumps in my push bike. But that might have been attributable to the bouncy tires, rather than Rad’s suspension system.

Unrelated to my mountain biking foray, the ability to switch between low levels of pedal assist and the throttle was something I also appreciated driving in dense urban areas. When you’re at a traffic light, for example, you want to be able to creep past other pedestrians without accidentally lurching into them as you push down on the pedal. But when you’re then trying to cross a busy street and make it around a double parked car, that throttle really comes in handy for speed.

Overall, both bikes were pretty dreamy to ride, and for the price point and convenience of delivery to your door and Rad’s mobile service network to test, buy and service bikes, I’m not left with many bad things to say about the bikes.